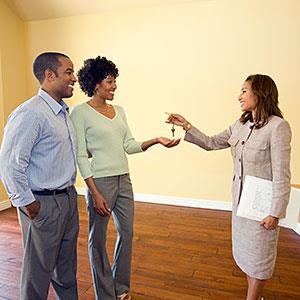 Mortgage rates are still low, but a recent rise might make potential buyers consider locking in as soon as possible.

Bankrate (RATE) announced Thursday that 30-year fixed mortgage rates across the country have risen to 3.67%. According to Freddie Mac, that's the highest the rate has been since hitting 3.71% on June 14 of last year.

In case homebuyers are wondering, that rate is still really low. The rate on a 30-year fixed mortgage hasn't hit 4% or more since last March, and only did so then for about a week. It hasn't touched 5% since early 2011.

Meanwhile, the average 15-year fixed mortgage rate also climbed to 2.92% — the highest it's been since June 21 — while the five-year adjustable rate mortgage ticked up to 2.77%, where it hasn't been since August. {C}

There's a whole lot of demand behind that surge, as the National Association of Realtors notes that existing home sales are at their highest level since 2009, supply of homes on the market is the lowest since 2005 and median home prices are up 10% from last year and have risen for nine consecutive months. Foreclosures and short sales make up a shrinking portion of those home sales, accounting for just 22% compared to 29% last year.

New-home sales have taken off as well, jumping 15.3% within the last year as prices increased nearly 20% over that span. While Bankrate says the fiscal cliff debates and the upcoming debt ceiling talks have put some fear into the market, only 8% of respondents to its survey expect mortgage rates to rise in the coming weeks. The 67% who feel those rates are going to stay where they are, however, might find themselves in a buying mood should that debt ceiling chatter get more bleak.

Related Articles
Mortgage Rates Home Buyers: Window of Opportunity Still Open The Fed recently announced they would continue their current pace of purchasing bonds until the economy was stronger. This bond purchasing program is the reason that mortgage interest rates are at historic lows. Rates began to increase over the last several months just on the anticipation that the Fed would announce that they would be […]
Mortgage Rates Mortgage Rates after the Bernanke Announcement Last week, Bernard Bernanke startled many by announcing that the Fed will not wind down their bond buying program right now. The program is part of an overall stimulus package geared at bringing back the national economy. The Fed’s purchase of these bonds over the last few years has driven mortgage rates to historic lows. The assumption that […]
Mortgage Rates 30-year mortgage rate steady at 4.57% WASHINGTON (AP) — Average U.S. rates on fixed mortgages held steady this week, hovering near two-year highs. But rates could change quickly next week when the Federal Reserve addresses its bond purchase program. Mortgage buyer Freddie Mac said Thursday that the average rate on the 30-year loan was unchanged from last week at 4.57%, just […]